Could it be…fuel for your wallet?

In this economy, everybody is looking for ways to save money, and a cheaper gas fill-up means a happy wallet for consumers nationwide.

Based off the recent trends, lower gas prices are exactly what Long Island residents may be able to expect in the near future.

According to John Callegari of Long Island Business News, gas prices fell 4.4 cents per gallon on average last week, as the downward trend continued here on the Island.

With the average retail price for gasoline on Long Island at $3.68 per gallon this past week, prices have already dropped 26.8 cents from the average last month.

However, even with the recent drop, Long Island gas prices still sit high above the national average, at $3.42 per gallon, according to GasBuddy.com.

The trends indicate that Long Island gas prices normally do sit higher than the national (and even statewide) average, which can be equated to its close proximity to a major metropolitan area.

Yet even with its higher than average prices, Long Island residents can be hopeful heading into the next few weeks.

According to CBS New York, oil analyst Peter Beutel says gasoline prices should continue to drop on the Island as we head toward the end of the month.

Wouldn’t that be nice? 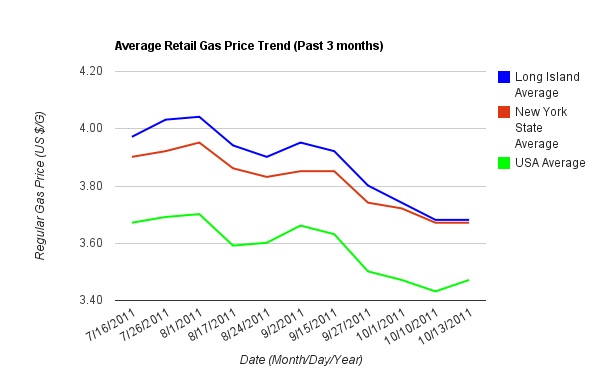 The roller coaster trend indicates gas prices may continue to decrease in near future. DATA COURTESY OF GASBUDDY.COM

Happiest of birthdays to my life-saving, griddle-cooking dad. Hope you’ve had the best day, love you Dr. D! #PGDMD